As we move into Part 5 of this series, we want to discuss the current nationwide pandemic, COVID-19.  We have been trying to make the point that healthcare has become the business of America, both as the largest employer and the largest individual segment of the U.S. economy, measured by Gross Domestic Product (GDP).

We are 100% confident in the stability of healthcare in the United States, and we would highlight the fact that even during the recession of 2008 and 2009, employment in the U.S. healthcare sector continued to grow (see chart below).  Today, the U.S. government estimates (pre-COVID-19) that jobs in healthcare will grow by 14% from 2018 to 2028.  We believe that with the spotlight in the United States focused directly on healthcare and preparation for future pandemics; we will see these estimates revised upward. 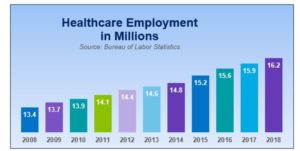 Many have viewed consumer technology as the industry to invest in up to 2020; however, as technology has begun to mature, I am now convinced that the next major opportunities lie in healthcare, specifically at the crossroad of technology and wellness through 2030.

We know there are more than 10,000 U.S. citizens reaching the age of 65 daily and becoming eligible for Medicare.  This means healthcare expenditures in the United States will very likely continue to grow at 4-6%, compounded annually, for the next decade!

I want to share three (3) graphs that I believe further support our position:

The graph below, represents the U.S. Government’s estimate of the growth of National Health Expenditures (NHE) through 2027.  We believe the number is understated, particularly post-COVID-19, given the expansion of resilience needed for handling the next pandemic that is surely to come.  We expect the United States to spend $1 to $2 trillion additionally over the next decade above the estimates in Chart 1.

The United States is the only major economy where healthcare delivery is essentially private, and a business that can generate profits (or surpluses in the non-profit world).  This is what makes the U.S. healthcare system unique. 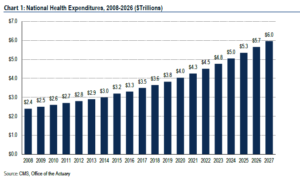 In the graph below, we can see how the United States $3.7 trillion is spent.  Consistently, hospitals or urgent care centers have taken about 1/3 of every healthcare dollar. 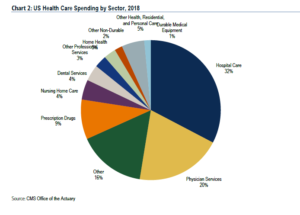 The graph below depicts sources of funding for healthcare in the United States. 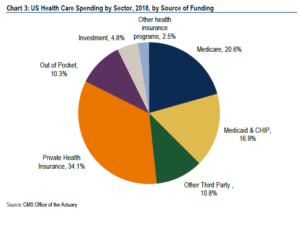 The United States resilience has always ridden on the strength of its private sector, not the public sector, and in a health crisis that strength is centered on the healthcare system.

Though healthcare in the United States is essentially a free market, it really is a hybrid.  Something between socialized medicine and free market.  The reason for that qualifier is that when accounting for Medicare, Medicaid and Government (Federal, State and local), about 50% of healthcare reimbursement is government controlled, even if provided overwhelming by private sector.  In particular, Medicare and Medicaid set rates it pays hospitals and providers; the philosophy is to take it or leave it.  No individual or collective price negotiations.

This past Friday, President Trump held a press conference where he brought the CEOs of Walmart (the largest private employer in the United States with a logistic platform that even the most advanced militaries envy), Target, and the two largest national private medical laboratories Quest and LabCorp, who have agreed to be part of the testing of Americans and supporting government efforts.  Collectively Quest and LabCorp have access to more than 10,000 active locations, dozens of fully staffed processing laboratories.  I am most familiar with Quest, because they are connected to our platform, PWeR.  Quest presently performs over 500,000 test collections daily, has more than 3,000 transport vehicles and 25 aircraft.  This is just one private company.

The current pandemic is unpredictable in time and slope.  It will however be a live laboratory on how socialized and free market healthcare systems compare.

In the democratic presidential debate of March 15, 2020, in a heated conversation between former Vice President, Joseph R. Biden, Jr., and Senator Bernie Sanders, Vice President Biden in countering Senator Sander’s proposal for a socialized medicine model or Medicare for All noted, in his eyes, Italy with its single-payer healthcare system has not handled the health crisis well.

We will continue this conversation in Part 6 of our next blog.