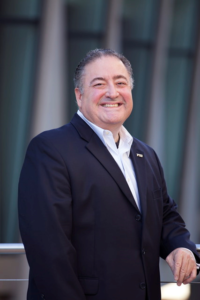 Mr. Noel Guillama is a nationally recognized expert and lecturer on healthcare management, operations and the use of technology in healthcare. Mr. Guillama developed numerous patents dealing with the use of health information technology, communications, data processing, predictive analytics and cloud computing.  He has spent 30 years in healthcare from designing, building and/or operating healthcare facilities ranging from medical offices though high-end diagnostics, to integrated medical systems.  Through nearly 40 medical practices, Mr. Guillama has collectively provided at risk care management to over 40,000 Medicare and Medicaid members in Florida.

Since 2003, Mr. Guillama has served as Founder and Chairman of The Quantum Group. Inc (Formerly NYSE Amex QGP) of Wellington, FL. Quantum is a healthcare information technology company and the developer of PWeR® EHR solution, as well as his newest endeavor, OXIO Healthcare Technologies Family of companies.

From March 2014 to present, Mr. Guillama has also served as Founding Chairman (and now a Director) of MediXall, Inc., a company that is bringing effective change to the U.S. healthcare industry and now trading on the OTCQB under the symbol “MDXL.” MDXL has assembled a network of over 20,000 providers connected to its’ new healthcare eCommerce platform, www.Medixall.com.

In 1996, Mr. Guillama founded Metropolitan Health Networks, Inc. (NYSE:MDF) and was CEO of one of Florida’s largest healthcare management companies that he grew from startup in 1996 to IPO in 1997, and then to $120M in revenue by FY2000. The Company was responsible for managing the care of over 20,000 Florida members. Five (5) years after his departure from the Company, it was purchased by Humana, Inc. for more than $850MM.

He is a graduate of the Massachusetts Institute of Technology (MIT) Birthing of Giants entrepreneurship program, as well as Executive Leadership programs at Florida International University and University of Georgia. He has served and continued to serve in various positions on nearly all major universities in S. Florida including FIU, FAU, NSEU and PBSC. He has been a member of the FIU Foundation Board for over 17 years.  Additionally, he has 13 years running as a member of the Investment Committee, where he guided the University foundation investments at more than $180MM; furthermore, he a “Founder” of the FIU College of Medicine.

Mr. Carl Larsen has over 30 years of experience in managing small startup organizations, as well as large organizations with upwards of $20 million in revenue and 350 employees. Since 2010, Mr. Larsen has been working directly with healthcare and technology applications. Prior to his current position with OXIO, Mr. Larsen was co-founder, Executive VP/COO of MediXall, Inc. (now part of MediXall Group, Inc. / OTCQB:MDXL), a healthcare “incubator” with a mission to bring transparency and free market completion to the healthcare industry.  Mr. Larsen was responsible for taking the MediXall.com eCommerce platform from an idea to Alpha testing stage.

Mr. Larsen also developed the Business Requirements Document, as well as the System Design Documents for the PWeR® Electronic Healthcare Record (EHR) conversion from a legacy/network system to a cloud-based platform. Prior to this, he was involved in various healthcare projects and is co-inventor of various patents on the use of data for commercialization in customer relationship management platforms.

In the nuclear industry, he led the turnaround of several major business units in two (2) Fortune 500 companies; Combustion Engineering, Inc. and Quadrex Corporation. At Combustion Engineering, he started a first-of-its-kind engineering office at a nuclear utility client that he grew from two (2) people to over 40 in less than nine (9) months doing nuclear safety-related work and he generated more than $25 million in new revenue for the Company within the first 12 months. During his time at Quadrex Corporation, Mr. Larsen became Senior Vice President, Engineering and Operations with responsibility for the technical services for the Company’s global nuclear engineering and consulting business.

Mr. Larsen is a past member of the American Nuclear Society, American Society of Mechanical Engineers, Institute of Electronic and Electrical Engineers and the Project Management Institute through a certified Project Management Professional. He is a Graduate of the University of Michigan with a BS in Nuclear Engineering, and a Masters in Business Administration from the University of Phoenix.

Mr. Gregg Steinberg is currently CEO of Greenway DNA, a comprehensive personalized DNA testing solutions provider, and also CEO for Green Globe Data and Research. Green Globe is the holding company for the operating entities controlling various brands and cultivation operations controlled by Jim Belushi. Mr. Steinberg is a member of the Board of Directors of The ArcView Group. The Arcview Investor Network currently consists of 600+ accredited investors investing in the cannabis and hemp market. More than 260 companies have raised at least $212 million as a result of their participation in Arcview. Arcview is also a partner in Canopy, a seed-stage business accelerator.

Previously, Mr. Steinberg founded Charlemagne Global Advisory (CGA), a strategy and operations advisory firm for both for profit and not for profit entities. Projects and initiatives of CGA have been in and around the incubation and acceleration of early and development stage start-up ventures, as well as more mature enterprises in various industries including clean and green tech, healthcare, CPG, professional services, technology and cloud-based apps, startup / early stage incubators and educational endeavors.

Mr. Steinberg was a participant in the healthcare technology revolution in the late 1990’s and early 2000’s and was an early stage investor in and advisor to The Quantum Group, a health services MSO and cloud-based EMR platform. Mr. Steinberg initially engaged in the company during its start-up and pre-revenue phase. When company went public in 2007, Mr. Steinberg accepted a position on the Company’s Board of Directors and its Audit and Compensation Committees, between 2007 and 2009. Between 2011 and 2013, Mr. Steinberg took an acting C-suite role for the company and has stayed actively engaged as an advisor to the Company since. He has maintained a close association with the Company since 2013 and has recently agreed to return as an Outside Board member.

Mr. Steinberg has been involved in numerous early-stage and entrepreneurial initiatives in a broad array of industries. He also serves on the Board of the Simon School Venture Fund (Simon School of Business, University of Rochester, NY), Kahal Study Abroad (Chicago, IL) and The Touchstones Discussion Project (Annapolis MD).