We ended the first part of this blog “U.S. health-care spending to climb 5.4% in 2018” and Beyond on healthcare cost projections though 2026, with doubts about what many would say are bleak projections.  Unfortunately, we believe it is nearly impossible for healthcare cost not to exceed the projections of CMS, as there is no way they won’t exceed the 20% of GDP before 2026.  In this blog, we will detail some of the reasons why the financial and demographical wave we are in is bigger than what most think.

First, we note that historically, the biggest impact to healthcare cost has been the expansion of government programs:  dating back to 1965 with the creation of Medicare and Medicaid, and more recently Part D prescription drug coverage and the Affordable Care Act of 2010, also known as ObamaCare.

The second, and I would state is the “master trend” has been the aging population in the U.S.

The graph shown below denotes the issue.  Look at the leaps in both the total number of people over 65 (left column) and the share of the population (right column), and with “one picture” you can see the issue.  Of particular interest should be the leap from 2010 to 2030, that is an inflection point and we have only just begun this leap.  Now, take a look at the right scale and see that in 1960 the percentage was only at 5% and the projected peak is over 22% in 2050. 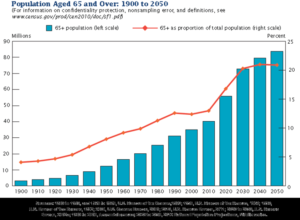 This graph is basically why I chose to move into healthcare in 1990.  We need new systems and processes, clearly more technology, as well as a major shift in the economics of healthcare.

Here is the breakdown by sex.

These graphs, going back to the 1950s, actually paints an ugly picture when you connect them to the “over 65” projections we looked at first.  The evidence from the Federal Reserve is clear and supports what we have noted before that “peak U.S. labor force participation was in 1999.”

Let’s move on and look at another set of data in the chart below:  healthcare cost inflation in comparison to normal inflation and even wage inflation over the past 20 years.  These numbers are relatively worse than anything we have shown to this point. 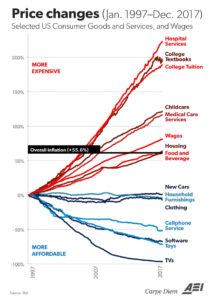 Here is even more bad news; a recent study (to be discussed further in a future blog) noted that as prices have been escalating, utilization or encounters have been dropping.  Since 2012, hospitalizations, medical office visits, and outpatient care have actually been decreasing.  As a society, we are paying more for less care, if you determine care by utilization.  The fact that from 2012 to 2016 the cost for both hospitalization AND prescription drugs increased 24% is just the tip of the iceberg.

All this information continues to confirm that healthcare will not grow itself out of this problem.  We are convinced that the actual results will be worse than projected.

We believe that the only real opportunity to change this master trend is with new initiatives that attack the issue by making it all consumer centric.

The longer we wait, the more problems we will see materialize. 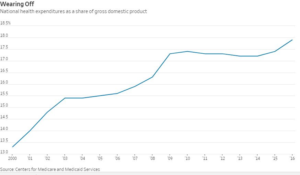 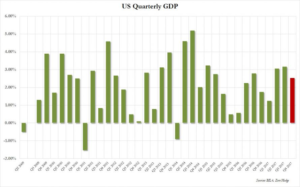